Explore each of our beautiful communities to learn more about these areas, while discovering a range of properties for sale including condos, suburban homes, and waterfront properties. 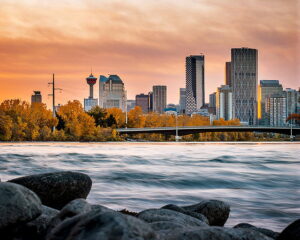 Welcome to the beautiful Calgary Alberta, our diverse and vibrant city is located in western Canada where the Bow and Elbow rivers meet, 80km east of the majestic Rocky Mountains and approximately 300 kms from Alberta’s provincial capital of Edmonton.

Calgary owes its rapid growth to its status as the center of Canada’s oil industry. However, it is still steeped in the western culture that earned it the nickname “Cowtown,” evident in the Calgary Stampede, its massive annual rodeo, and festival that grew out of the farming exhibitions once presented there.

Calgary has always been a resilient city, overcoming devastating floods like the one in 2013 that cost over $6 billion in financial losses and property damage across Southern Alberta. Calgary has suffered from the decline in world oil prices and the associated job losses, and now the recent Covid crisis adds to the toll of an already struggling economy. But this is what sets Calgary apart, the tenacity to keep going and push through makes this community one that thrives from the inside out! Calgary’s economy is versatile and ever-expanding with growing sectors of energy, finance, technology, manufacturing, retail, tourism, film and television production, and more. With an entrepreneurial spirit and innovative approach to life, Calgary is determined to come out on top!

According to the Economist Intelligence Unit, in 2018 and 2019, Calgary was ranked as one of the most livable cities in North America and Calgary has also been phrased as one of the most walkable communities in Canada. Bike paths, river walkway systems, parks, and views all make for a well-rounded lifestyle.

With over 200+ Communities across Calgary each having their own independent culture and perks. Downtown you will find up-and-coming modern communities like Eau Claire, Chinatown, and the East Village. A short commute to downtown is the Beltline which includes popular living areas like Victoria Crossing and the River District along with an entertainment district. South of the downtown core you will find inner-city communities such as Sunalta and Mount Royal that are surrounded by unique shopping and dining options. Hounsfield Heights / Briar Hill, Hillhurst, Sunnyside, Rosedale, Mount Pleasant, and Crescent Heights are to the north and offer buyers a family centred well established communities. New, up-and-coming areas like Inglewood and the East Village are to the east of downtown and close to the Calgary Zoo and historic sites like Fort Calgary. In the southwest communities like Parkhill, Bankview, Altadore are growing and prospering. Other Calgary communities including Evergreen, Somerset, Auburn Bay, Country Hills, Sundance, and McKenzie Towne offering quick access to city limits and the downtown core. Step on in and explore all our communities across Calgary’s city limits, with something for everyone, you are bound to find a lifestyle to your needs.

With Calgary’s close proximity to the Rocky Mountains weekend getaways and day trips to Banff, Canmore or Lake Louise are a breeze! Public parks and forests surround much of the mountain range, and they are popular tourist destinations, especially for hiking, camping, mountaineering, fishing, hunting, mountain biking, skiing, and snowboarding. World-renowned ski resorts like Sunshine Village and Lake Louise are less than 2 hours away.

The legacy of the 1988 Olympics, that were hosted in Calgary, are still felt to this day with venues like the Olympic Oval, Scotiabank Saddledome and Canada Olympic Park continuing to host world-class athletes and events.

Even though the winters can be cold, Calgary has the sunniest days year-round of Canada’s 100 largest cities, with just over 332 days of sun!

As of April 2021, the Calgary housing market continues to show resilience and growth. According to CREB® chief economist Ann-Marie Lurie, “Low lending rates and improved savings have supported sales activity.”

Detached home sales have continued to improve across communities in Calgary but as of March 2021, inventory levels remain low. Semi-Detached homes for sale in Calgary have seen consistent price increases as inventory remains low and demand is increasing. Row housing has stayed consistent with the market trends of the detached and semi-detached market even rising above long-term averages, but row homes prices remain steady. After experiencing 5 years of falling prices, apartments and condominiums are on the upswing as well. The sales activity has increased, and new listings for sale across Calgary have also increased.

Regional real estate markets around Calgary such as Cochrane, Airdrie, Okotoks, and Strathmore have all echoed the trend of strong sales activity throughout the province.

Overall, the Calgary Housing market has been surprisingly busy, and many are beginning to see the low inventory and high demand balance out. According to CREA®, the national average home price is expected to increase to just over 16.5% on a yearly basis and remain stable and strong throughout 2022.

Calgary may just be the right place at the right time!

Explore real estate in Calgary to discover the right place for you!