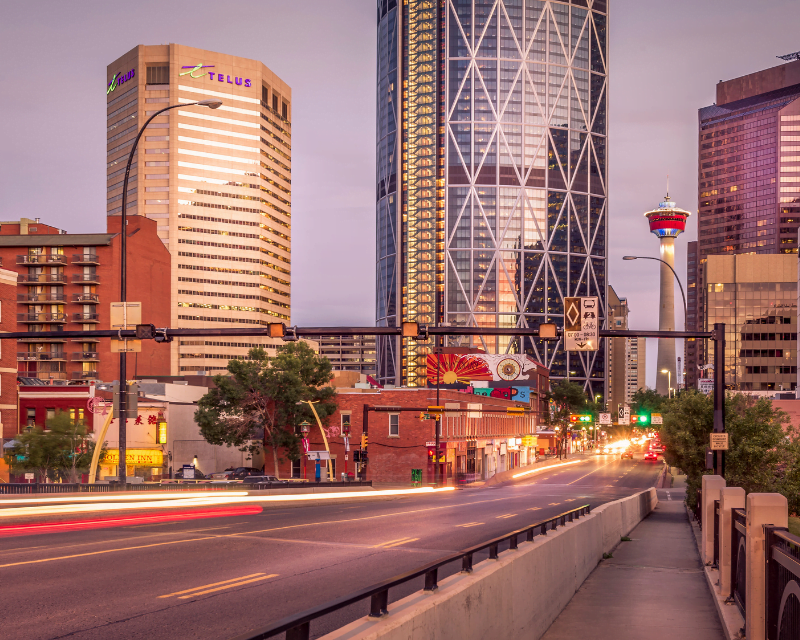 Welcome to Chinatown!  This district of Calgary is located along Centre Street in the NE area of downtown Calgary, immediately west of East Village.

Calgary’s Chinatown is 110 years old and is on its way to becoming Canada’s third largest Chinese community by population, and largest in area.  This district is the first Chinatown in Canada to be identified in local city bylaws.

Located on the west end of Chinatown, the Chinese Cultural Centre, with its stunning traditional architecture and decor. This centre is the largest facility of its kind in North America. Dragon City Mall is located in Chinatown, offering a large variety of restaurants, cafes, various retail stores. You’re also steps away from so many fabulous downtown amenities such as the pedestrian friendly Stephen Avenue mall, Olympic Plaza, the downtown Central Library branch, the CORE Shopping Centre and Devonian Gardens.

As of 2020, Chinatown was home to just over 2,470 residents in apartment and condominium complexes.

Although this district is one of the oldest in Calgary, it has one of the newest Community Associations, formed in 2016.  It meets in the Chinese Cultural Centre https://www.culturalcentre.ca/ and the goal of this association is to advocate on behalf of citizens and bring together the people living in Chinatown.

There are many courses offered at the Chinese Cultural Centre, including languages, arts and culture, martial arts, fitness and other community-enriching activities.

The Sien Lok Park, located at Riverfront Ave and 1 Street SW, is a public park with Chinese lion sculptures, a pagoda, a tai chi area & a playground.  The paths in this park connect to the Riverwalk pathway system along the Bow River, offering a scenic view of the river. Prince’s Island Park is located just west of Chinatown, and has acres of beautiful green space, pathways and a large playground for the children.

At Royal LePage Benchmark our market-leading team of real estate professionals are dedicated to serving the real estate market across Calgary Alberta. To help you find that perfect property in the Chinatown area, contact us today and we will put you in-touch with an experienced REALTOR® that specializes in this community.